Educating the Girl Child in Merti

This film is about the girl child education in Merti.

The weather man has singled out Counties in much of the Eastern (Makueni, Machakos, Kitui, Marsabit, and Moyale); Counties in the western and northern parts of the Coast (Taita Taveta and Tana River, Kilifi, Lamu); and Counties in parts of the Rift Valley (Samburu, Isiolo, West Pokot, Baringo, Laikipia, and Turkana) as the areas that will be badly affected with near normal rainfall.

Speaking to the press director KMD Joseph Mukabana, said rainfall distribution within the 2011 long rains season is expected to be generally poor over most part of the country, with long dry spells likely to occur. Only April the peak month for precipitation during the season that supports the country’s yields is forecast to have normal rains.

Should the forecast of reduced rains come to pass then the country is bound to face more challenges with the population feeling the heat of high food prices as well as higher electricity bills.

The Arid and Semi-arid Lands (ASAL) according to the forecast will be worst hit. With the effects of the drought still being felt the pastoral communities are likely to lose more of their livestock to drought. They will be looking to the government’s initiative to purchase their livestock to save them from massive losses that they might incur if their livestock were left to die.

Merti Maarifa Centre held its first open day amid pomp and color in Merti town. The event which saw approximately 500 community members participate had lots of activities most of them by the various groups and community members. As early as 8.00 am in the morning of 28th October 2010 community member and other stakeholders started streaming to the venue all set for the joyous day. This happened as groups made preparations for their presentations and exhibitions. The chief guest Mr. Kipsiwa the district officer Merti division was among the early arrivals prepared to witness all the day’s events.

The day kicked off with a public Baraza, where guests were treated to various entertainment items from various groups. Merti boarding school started off the entertainment segment with a song on the effects of a abortion in our society that moved the crowd into tears. The girls also had some educative pieces of entertainment on the importance of information as well as analyzing the trends in education within Merti Division. Macci secondary school on the other hand presented a lovely poem and a skit on information flow in our society as well as usage of ICT equipment such as computers.

To wrap up the day’s entertainment were the traditional dancers; we had two group performances that got everybody to their feet. They performed traditional dances with the crowd joining in leaving the place in a cloud of dust.

The day had lots of event lined up with various groups setting up exhibition tents; among those groups was Dawiti women group who had constructed a traditional Borana Hut. Outside their tent they performed a mock Borana traditional wedding ceremony that was an attraction to many of the guests. They then welcomed the guests in their tent to a treat of locally prepared meat commonly known as “nyirinyiri” and traditionally fermented milk that was very delicious.

Waldagenya Women group had their “bakery” all set up outside their tent. They took the opportunity to show the public the process of bread preparation. At the end the participants had a chance to have a taste of the final product.

Merti Health Centre was able to offer Voluntary Counseling and Testing service at their tent. They further displayed and taught the public on how to effectively use their mosquito nets and also donated nets to pregnant mothers.

Cooperates were not left behind either and Equity bank mad it presence felt by setting up an exhibition tent. They introduced the public to their customer friendly services. Speaking during the event the bank’s manager Mr. Abdi Adan Godana expressed his joy in having the opportunity to join the Maarifa fraternity and the Merti community in celebrating the richness of their culture. To him this was amazing and he promised Merti community that Equity Bank is glad to be a member of the community. He urged the residents to open up accounts and deposit cash at the bank’s stand. He also promised to work with the Maarifa centre to set up an M-Kesho agent at the premises. He encouraged organizations and institutions to open e-banking system at the centre since there was good internet connection. He bought 10 crates of soda to support the event and gave a token of appreciation to Merti Boarding.

Speaking on behalf of the Maarifa centre’s advisory committee Sheikh Hassan Duba gave an insight look of the Maarifa centre to the public. This helped the public understand how the centre operates, how it can benefit then and also what is expected of them in terms of the centre’s sustainability. He announced the new rates of service at the centre, and an offer of free of free internet services to the public between 3.00pm to 4.00 pm every day. He also announced the centre’s intention to start computer training centre to help the community gain more knowledge on ICTs.

Speaking during the event the Chief Guest Mr. Kipsiwa the area Division officer said he was impressed by the public’s response to an open day. He urged the public to honor the day by ensuring they are getting sufficient information from all sectors f the community. He promised his support for the centre and asked the members to cover key areas that will effectively introduce the community to the world.

The day’s events ended with a mouthwatering soccer game between Mawingu FC Vs Blue Rangers FC. The tie saw Blue rangers emerge victor with a three goal demolition of Mawingu who only managed to score one goal.

As the open day came to a close I had no doubt it left open happiness in the hearts of all the participants.

MERTI MAARIFA CENTRE: LINKING THE POOR MARGINALIZED COMMUNITIES TO THE REST OF THE WORLD.
By: Guyo Haro Wario and Boru Godana Boru

Its literary being in the dark, it has been lifeless, and that is how Merti community has been living over the years. One of the biggest divisions in Isiolo district Merti is about 260 kilometers North of Isiolo Township. Read full sory
at 7:39 AM 1 comment: 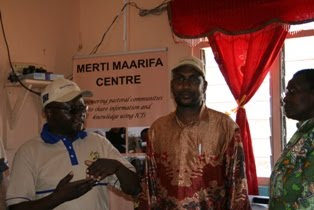 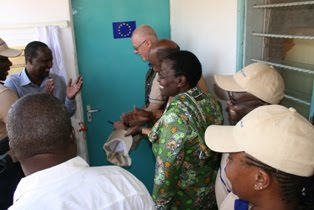 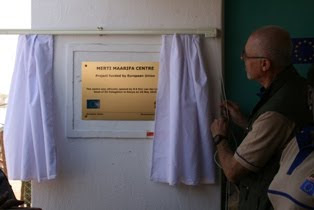 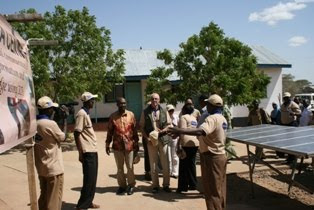 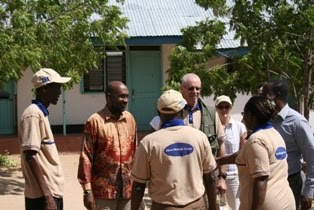 A new partnership between ALIN and Drought Management Initiative www.dmikenya.or.ke resulted in the birth of Merti Community Maarifa centre commonly called Fulla bekh it’argat in the local Borana language. Merti town is in Isiolo district of Eastern Kenya located about 240km from Isiolo town. The Drought Management Initiative (DMI) is a joint Government of Kenya/European Commission project aimed at improving capacities of drought management systems in Kenya. The project is implemented within the framework of the Arid Lands Resource Management Project (ALRMP II), under the Ministry of State for the Development of Northern Kenya and other Arid Lands. For More info

Merti is a small but extra-ordinary town in Isiolo County. It's approximately 240KM from Isiolo town. This film is highlighting and establishing the community, how it came to settle there, features and the people of Merti

Three capacity building workshops and a stakeholder’s meeting were held at Merti maarifa centre from 20th February – 6th March 2010. These workshops ran concurrently involving participants drawn from community development workers, women and youth groups, business community, local leaders and farmers. The main purpose of the workshops was to strengthen the local communities’ capacities in information and knowledge management and impart skills on use of ICTs and multimedia technologies. For more information and reports CLICK HERE

Alternative Livelihood for the Waso Borana